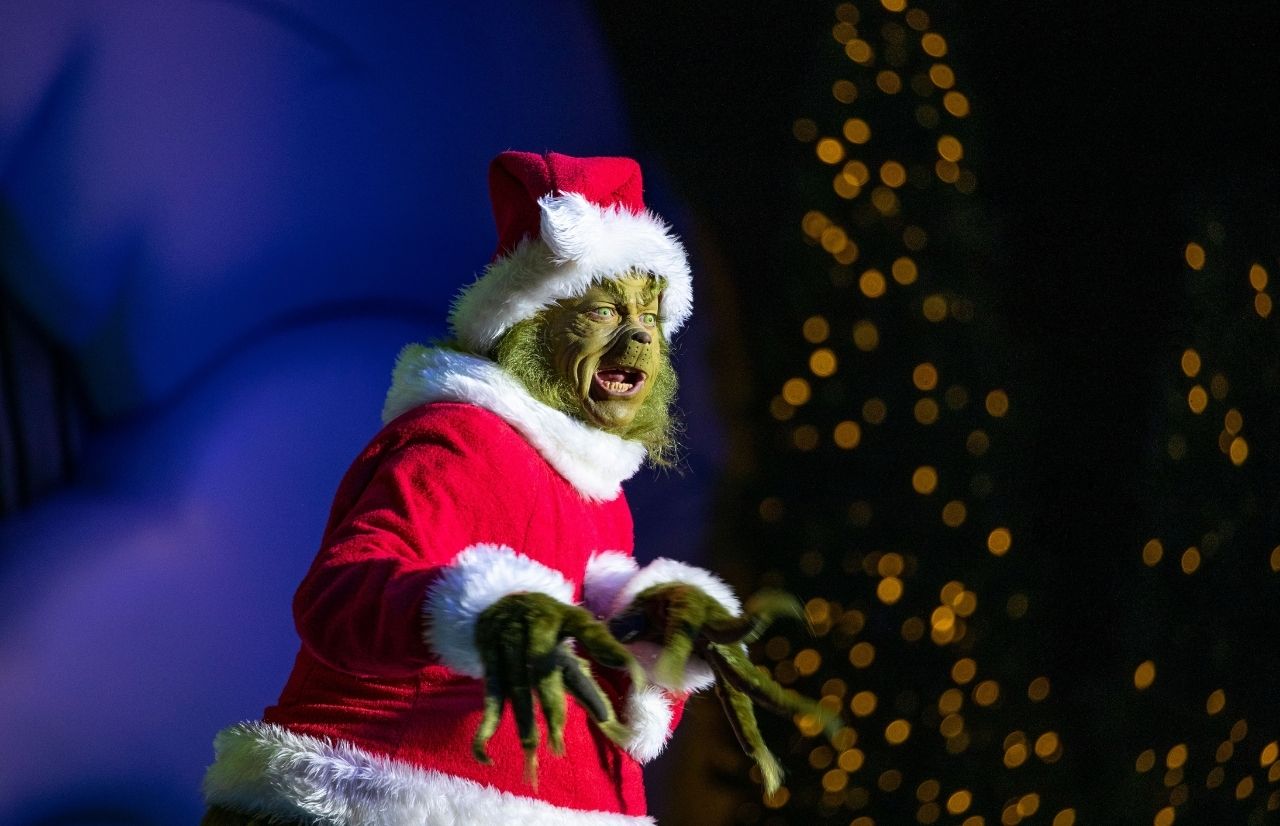 Have you ever had the chance to experience Grinchmas at Universal Orlando Resort? If you haven’t, then you’re missing out on one of Orlando’s fun holiday festivities.

Islands of Adventure Seuss Landing is completely decorated with yuletide magic in celebration of Dr. Seuss’s classic book, How the Grinch Stole Christmas that was published over 50 years ago.

How The Grinch Stole Christmas!

This Dr. Seuss story is about a revenge-seeking Grinch who lives on the outskirts of Who-ville.

Since he is detested by the citizens of this town, he plans on destroying Christmas for all the Whos living in Who-ville.

This legendary story would go on to produce multiple films in 1966, 2000, and 2018. Plus, an annual event that takes place inside Islands of Adventure and Universal Studios Hollywood theme park.

You can get your copy of the book How the Grinch Stole Christmas on Amazon here.

History of Grinchmas at Universal Islands of Adventure

Over the years, Grinchmas has transformed Islands of Adventure into a wintery holiday since December of 2000.

The Seuss-inspired holiday would go on to have tree lighting ceremonies, seasonal treats, and other festival happenings.

This event would open as a tie in to the hit film starring Jim Carrey that featured Cindy Lou Who, Max, the Grinch, and Martha May.

Grinchmas was thought to have been brought on as Universal’s own interpretation of Christmas in order to compete with the likes of Disney.

Universal would do this by transforming Seuss Landing into Who-ville complete with the Grinch’s Lair.

The lair was built to look like the Grinch’s home from the 2000 film and once guests ended their walkthrough, they’d be greeted by the infamous man himself.

Throughout the dark queue, guest would see all kind of trinkets known to the Grinch plus a few interactive elements within the queue.

Unfortunately, The Grinch’s Lair would close to make way for the High in the Sky Seuss Trolley.

Prior to the current home of Grinchmas Who-liday Spectacular on the Universal Orlando soundstage, the Grinchmas show would take place on a small stage between Circus McGurkus Café Stoo-pendous and the All You Can Read bookstore complete with a tree lighting ceremony towards the end of the day.

You can rent or buy the 2000 film, How the Grinch Stole Christmas, here on Amazon.

Preparing for Grinchmas at Universal’s Islands of Adventure

Before we get into all the fun activities of this Who-ville holiday, let’s go over a few questions that you may have about the event.

When Does Grinchmas Start and End for 2022?

This year, Grinchmas is happening from November 12, 2022 through January 1, 2023. You’ll be able to see the Grinch and the characters of Whoville roaming Islands of Adventure in the Spirit of the Season.

What is Grinchmas Who-liday Spectacular?

The Grinchmas Who-liday Spectacular is a special holiday showing of the classic tale How The Grinch Stole Christmas. It features music recorded by Mannheim Steamroller and a score composed by Chip Davis.

This Grinchmas show takes place inside one of the sound stages on property that’s right between both Islands of Adventure and Universal Studios Florida.

You definitely have to watch this touching Grinchmas show during your visit to Islands of Adventure once it returns.

How much are Grinchmas tickets?

Grinchmas at Islands of Adventure is FREE and is included with your park admission.

So, once you pay to get into Islands of Adventure you won’t have to worry about having to pay a separate price for this holiday adventure.

Check out the ticket breakdown for Universal Orlando Resort here!

Grinchmas at Universal’s Islands of Adventure

Not only can you enjoy the incredible show of Grinchmas Who-liday Spectacular, you can dine with the Grinch himself for breakfast.

Breakfast with the Grinch and other Seuss Landing characters is a separately-ticketed experience on select dates at Circus McGurkus Cafe Stoo-pendous and you must have already paid for park admission to participate.

This holiday breakfast is quite interactive. The characters at Universal Orlando always have great improvisational skills, but during this character meet-and-greet, there’s little bit more of the Who-ville Christmas magic.

When does the Grinch Character breakfast start and end?

The Grinch & Friends Character Breakfast starts on November 12, 2022 and continues until December 29, 2022.

You can book this experience by by visiting www.universalorlando.com/holidays.

How much is the Grinch Character Breakfast at Universal?

You’ll be happy to know that Annual and Seasonal Passholders are able to get a 20% discount on the dining experience.

Recommended: 27 Most Festive Things to Do in Orlando for Christmas

Atmosphere in Seuss Landing during Grinchmas

The holiday spirit is felt all across Seuss Landing. All of the Whos come out to partake in the Christmas festivities with you!

Plus, their interactions are top-notch which is something that I truly enjoy during Grinchmas.

You’ll not only be engulfed in the holiday décor, you’ll see a particular Who sleeping on benches, Whos singing holiday carols, and Whos ready to tell you some of the many wonderful Christmas stories.

8 Tips for the Grinchmas Who-liday Spectacular You MUST KNOW

Before we end this Who-liday guide, let’s go through some tips to help you make the most of your time during Grinchmas.

What to Know Before You Go to Islands of Adventure

Islands of Adventure is located in the Universal Orlando Resort and is just a quick ten minute walk from Universal Studios or a short ride on the Hogwarts Express.

What time does Islands of Adventure open?

Universal’s Islands of Adventure is opened 365 days a year from 9 a.m to 6 p.m. in the regular season. Hours may change based on the busyness of the park.

How much does it cost to go to Islands of Adventure in Florida?

The cost of admission starts at $125*, but I like discounts so I use The Park Prodigy and Groupon to find cheap Islands of Adventure tickets.

*Please keep in mind that the cost for tickets to Islands of Adventure vary based on the season and are subject to change at anytime.

What rides to do first at Islands of Adventure?

Hipster Power Tip: If you find a ride or an experience that you’re on the fence about on day one, wait until your second day to try it out.

What is the best time to go to Islands of Adventure?

The best times to visit Islands of Adventure are:

These months are closely followed by March, May, September, and October as still pretty decent visiting times.

Get the full Islands of Adventure Crowd Calendar here!

My Final Thoughts on Grinchmas at Universal

Overall, you’re going to have a fun day experiencing Grinchmas at Universal.

It’s a great addition to Islands of Adventure during the holidays and it’s a perfect memory for you to create on your next trip to the parks.

This is a staple of holiday time at the Universal parks and a holiday traditional you must start.

If you enjoy this article, then you’ll love these holiday-inspired tips:

Have a Merry, Merry Grinchmas Hipsters!