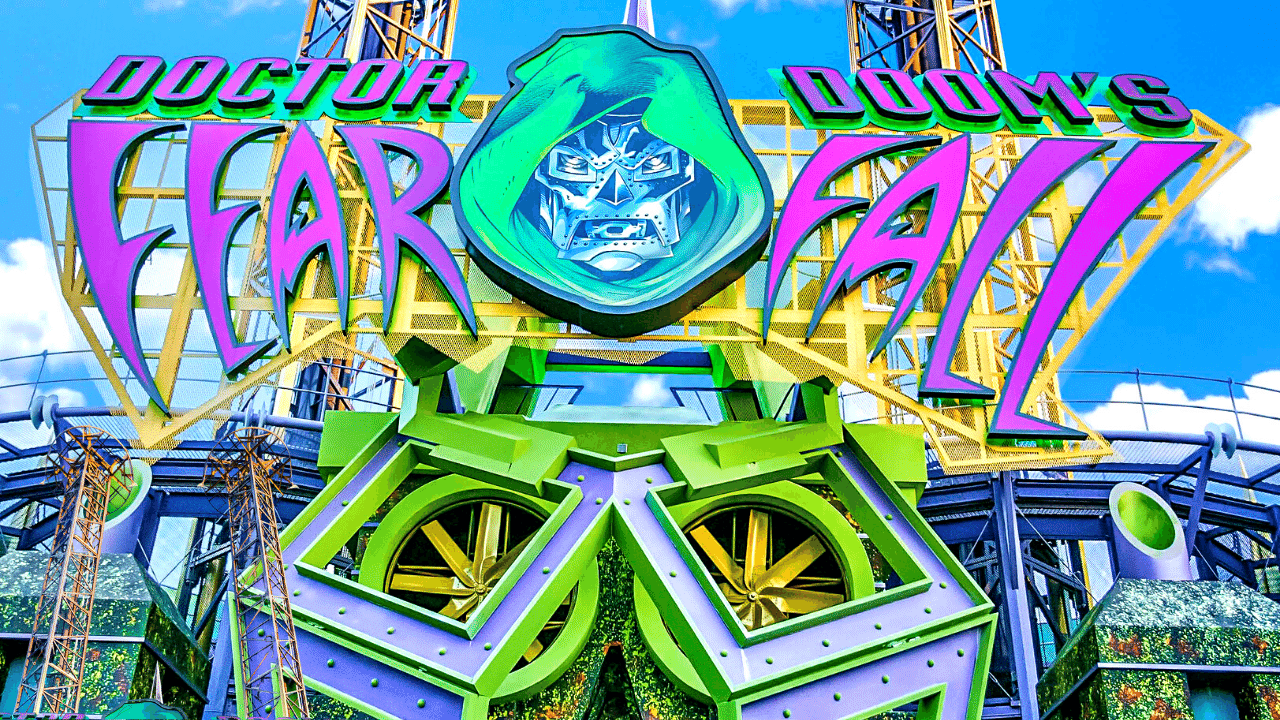 Are you too scared to ride Doctor Doom’s Fearfall at Universal’s Islands of Adventure?

Hidden in an alley within the Marvel Superhero Island, lies a supervillain concocted attraction. Most people don’t even realize that it is an opening day attraction, making its debut with Islands of Adventure on May 28, 1999.

But the question is why is it so overlooked? It could possibly be due to the fact that it’s a bit hidden away and its next to the Amazing Adventures of Spiderman ride, a popular superhero.

Today, we will dive into the history and why you should give it a bit more love on your next visit to Islands of Adventure.

Regarding Dr. Doom, I will touch on:

So, let’s dive into the mind of Victor Von Doom!

Comic book nerds will recognize this classic villain but for those who aren’t as well versed, let me give you a brief breakdown. In the comics, Dr. Doom made his introduction as a villain in a Fantastic Four story and his been their archenemy ever since.

He is the leader of the fictional nation of Latveria, which you see a hint of in the attraction. Regularly, he has made it in the Top 5 of Greatest Comic Book Villains of All Time on several publication’s lists.

He is known for his extreme genius level intellect and creating many doomsday devices in his heyday. Dr. Doom is strong and well versed in hand-to-hand combat and a master of the dark arts ala Doctor Strange.

In short, he is not to be underestimated in any capacity. Which makes sense why he was given his own ride.

The plans for Islands of Adventure started in 1991, just a year after Universal Studios Florida came to be. Universal’s vision for the park would be for it to consist of eight islands that are based off of stories and tales that are very beloved.

However, most of them would be inspired from Intellectual Properties.

By 1993, One of the islands chosen would be Marvel Superhero Island, themed to the Marvel Comics. As planning and construction progressed on the park, it was determined that there would be eight opening day attractions in 1997 and one of them would be Doctor Doom’s Freefall.

The original plans for the attraction were for it to be an Intamin free fall drop tower attraction. This was eventually scrapped due to the product being discontinued.

With that move, Universal contacted the good folks at S&S Worldwide, who has most famously worked with Kennywood to bring us Steel Curtain, to turn it into a space shot attraction instead.

It was completed on time with no issues or delays, and it opened with Islands of Adventure on May 28, 1999, as a debut attraction.

Here is where that brief Doctor Doom nerd knowledge I mentioned in the beginning will come in handy slightly.

When you first enter the attraction queue, you walk into the embassy of Doctor Doom’s home country of Latveria. The embassy seems to also double as his laboratory for him to put his full intellectual power to its greatest effect.

Due to the fact that these days, there is little to no wait for the attraction, you will most likely walk past the hidden gems of the queue.

There are various television screens showcasing propaganda footage of Latveria, along with Dr. Doom’s latest invention.

Focusing on the invention in question, the video makes a point to stress that with the pure power of fear, thus the name of the attraction, he will crush the Fantastic Four. Could be a slight problem, you know?

This is where the riders come in.

You will be one of the “test subjects” for the infamous doctor. And by test subjects, I really mean captive test subjects whose fear will be extracted to power the weapon.

After taking an elevator to the platform, you will place your items safely in compartments near the seats and strap in.

Doctor Doom will then tell you his grand master plan and will proceed to have the Doombot count down as the ride begins to lift you up in the air.

At this point, you will be blasted up in the air, giving you awesome views of the park for 60 to 90 seconds. Thankfully, the descent or drop is slow, allowing riders to recover slightly from the adrenaline rush safely.

As you depart, Dr. Doom shares his glee in getting exactly what he needed from you, his captive test subject.

Digging into the ride stats, the ride itself features two vehicles and can hold 16 people per vehicle. You are essentially looking at 550 riders per hour on a busy day.

How tall is Dr. Doom’s Fearfall?

Doctor Doom’s Fearfall is 185 feet tall and hits maximum speed of 40 miles per hour! If you think that’s incredible, then check out more of the current stats below:

In short, if you have done Twilight Zone Tower of Terror, it’s a bit similar as far as falling sensations go. It’s not scary but this is completely dependent on your personal fear of heights.

If you can do Tower of Terror, then you’re fine as it’s not too long or intense for one to get sick from if you suffer from motion sickness. You do have to be 52 inches to ride, however.

This dueling tower attraction is still around for a reason. It doles up just enough thrill and story for Marvel comic book lovers, showing that you don’t need a huge coaster to be one of the best!

What other Marvel Supervillain should have their own attraction on Marvel Superhero Island? Let us know in the comments section below!

UP NEXT: SMACKDOWN! Universal Studios vs. Islands of Adventure: Which Should You Choose?