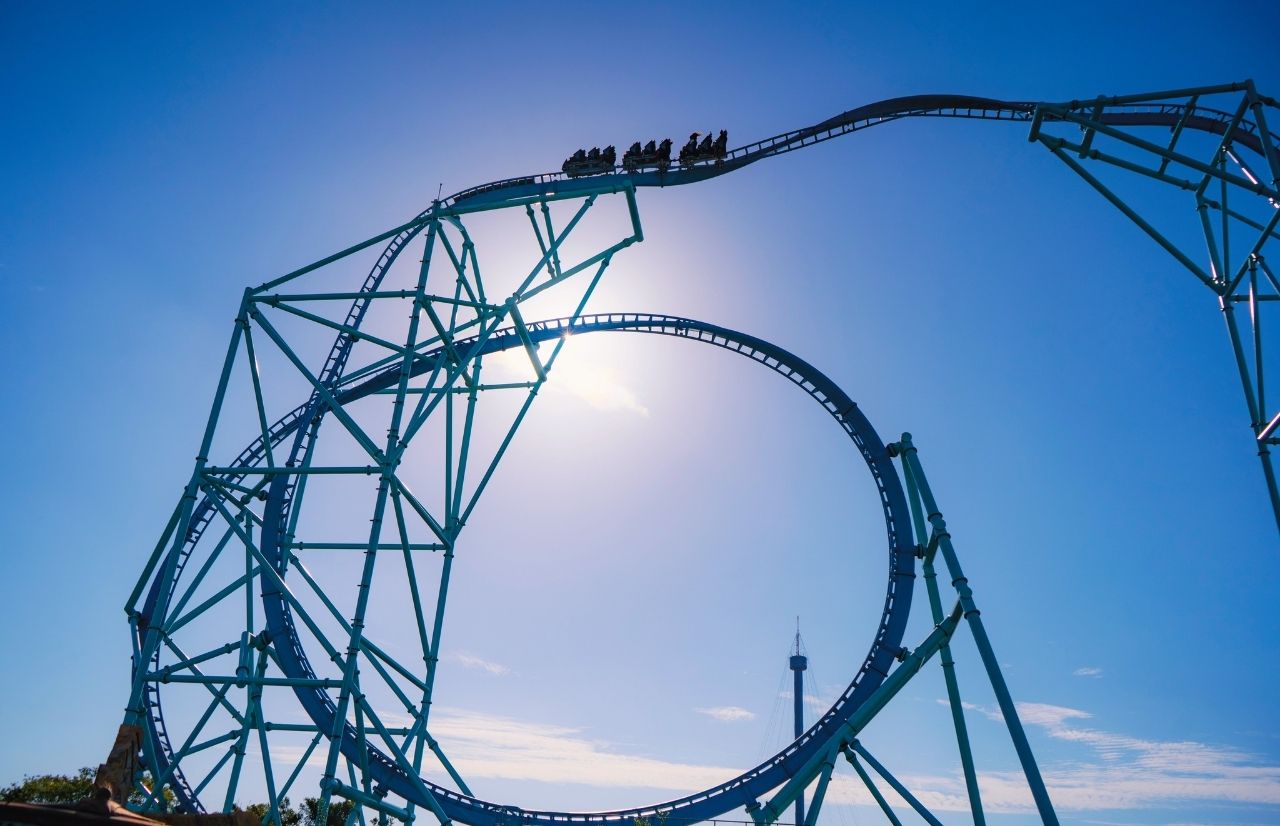 Do you want to know what the best roller coasters are in California? Lucky for you, I’ve got the best picks for you!

Most visitors come to California for many tourist attractions: Los Angeles, Hollywood, Disneyland, Knott’s Berry Farm, San Fransisco and to relax on one of the numerous beaches the state is known for.

However, sometimes visiting a theme park means you want to get on the most thrilling, adrenaline pumping coasters the state can provide and they certainly deliver!

Today, I will be showcasing the top 5 roller coasters that California is home to! They won’t be listed in any particular order, but we will dive into the following:

We are going to start off with a classic of California, Tatsu!

Located at the Six Flags Magic Mountain, Tatsu is a B&M steel flying coaster marvel achievement. The conception of the ride started in early 2004 with land clearing starting in mid-2005.

However, the actual construction of Tatsu was completed and opened to the general public on May 13, 2006.

Since its debut, it has been in the top 50 of Golden Ticket Awards’ Top Steel Coasters list and has broken numerous records in its time.

It held the record for tallest, fastest and longest steel coaster on the planet until 2016 when “The Flying Dinosaur” opened in 2016 at Universal Studios Japan.

Fortunately, it does still hold the record for the tallest, as The Flying Dinosaur matches the maximum speed of Tatsu, soaring guests at 63 miles per hour (MPH). Making it one of the best roller coasters in California!

The steel track is impressive, being 3,602 ft in length. While the tallest point of Tatsu is 170 ft, its highest drop is 111ft. But it boasts 4 inversions, 103 ft corkscrew, 96 ft zero G roll, an 80 ft horseshoe and the most famous aspect of the ride, the pretzel loop.

A pretzel loop features a downward half loop and upward half loop, making a visual of a pretzel. This element of the coaster is the tallest in the world at 124 ft. The zero G roll is the only one ever featured on a flying coaster as well.

Tatsu sits menacingly and proudly on top of Samurai Summit like a dragon guarding something of dear importance, waiting to take riders on a soaring journey of risk and thrill.

Recommended: How to Plan the BEST California Road Trip Itinerary for 7 Days

It was built by Baltimore based coaster manufacturer, Premier Rides, and construction began in 2011. It replaced the Log Jammer log flume ride. This was done mainly because not only was a new coaster being built but a brand-new themed section of the park where it would be.

With this came the demolition of a restaurant and theater in Six Flags Plaza. Track was laid and it went vertical being completed in full in early April 2013. When it opened, it was a smash hit with visitors and smashing records along the way.

To this day, it still holds the record for tallest loop in the country. It made the Top 50 of Golden Ticket Awards Top Steel Roller Coasters in 2014 and 2017 and surpassed Superman: Krypton Coaster for the record of tallest vertical loop and used to be the tallest in the world.

The vertical loop in question is 160 ft and the first to feature a top hat element. You can enjoy a minute and a half of thrill including 4 G forces, a dive loop and 2 inversions that launches you at 70 MPH.

Around the plaza itself is a dining area and gift shop along with a stage for performances.

The addition of Full Throttle was welcomed with open arms and continues to be a favorite amongst locals.

This next one on our list is a newer coaster, only opening in March of this year due to the pandemic delay. Emperor is SeaWorld San Diego’s new B&M dive coaster and has made quite the splash!

Originally, the ride was themed to sharks and was going to be named “Mako” but in a smart move (in my opinion it was smart because I’m biased in the fact that I adore penguins) they announced at IAAPA that it would instead be changed to “Emperor.”

Emperor boasts 4 inversions, with the first plunging visitors at 90 degrees where you will be facing down at 14 stories high! Making it one of the best roller coasters in California!

For a little over a minute, you will travel across the remaining inversions, a barrel roll, an Immelmann loop and a hammerhead turn.

I anticipate that this ride will certainly be a must do for those visiting the park and for roller coaster enthusiasts!

Get your Tickets to SeaWorld San Diego TODAY!

Continuing our love and appreciation of dive coaster’s we can’t go on without giving flowers to the first dive coaster in the state of California, Hangtime, located at Knott’s Berry Farm.

The ride is a homage to the surfing hype days of 1960s California and is themed with a nautical/ surf vibe.

The attraction is a steel custom infinity coaster and the second in the country. Unlike Emperor, it features 5 inversions! five!!! Hangtime also broke records when it made its debut in May 2018.

It boasts the steepest drop in the state of California at 96 degrees with a top speed of 57 MPH. Compared to Emperor, that’s not far behind but still an impressive achievement nonetheless.

It blends perfectly with the boardwalk area below as it towers above at 150 feet. The scariest part is the dangling of riders at the tip top of the first vertical drop where along 2,198 feet of track.

If you are looking for thrills, this is the place to go at Knott’s Berry Farm!

Disney California Adventure is home to the thrilling Incredicoaster, a high-speed coaster that takes riders on a wild ride through the beautiful theme park.

On this Disney high-speed adventure, you’ll join the famous superhero family to save Baby Jack-Jack’s from causing too much chaos with his superpowers right in the heart of Pixar Pier!

The track twists and turns at speeds of up to 55 miles per hour, providing you with an exhilarating experience. Icredicoaster is steep and intense, making it a favorite among thrill seekers of all ages. Making it one of the best roller coasters in California!

Whether you’re a Disney fan or just looking for a new adrenaline rush, the Incredicoaster is sure to leave you breathless.

Although this great amusement park will be closing in the next ten years, we had to mention Gold Striker on this list! Located at California’s Great America park!

It is the second oldest on the list but not to be underestimated as it has made it on to Amusement Today’s Top 10 Wooden Coasters list every year since its debut in 2013.

Gold Striker has set the standard for modern wooden coasters and proudly positioned at the park’s entrance to give visitors a taste of what’s to come for them during their day visit.

It holds the title for the tallest and fastest wooden coaster in Northern California, with a height of 108 feet and maxing speeds of almost 54 MPH.

Gold Striker may not seem impressive but then you have to remember what it’s like to ride a wooden coaster. Its very anxiety inducing, yet thrilling.

Originally, the coaster was supposed to open for the 2009 season but was cancelled.

Fortunately, Cedar fair revitalized the project in 2012 and it went vertical in august of that same year.

The ride’s official announcement, as a fun fact, was with the help of representation from some members of the San Fransisco 49ers, who’s theme was similar to the ride’s!

A signature of the ride is its initial descent tunnel which is the longest of any wooden coaster to date!

To add, its drop is also enclosed, making it the world record holder for longest drop tunnel on a wooden coaster, the drop being 174 ft. It is also a Jeff Pike designed coaster, his eighth.

Themed to the Gold Rush and Wild West era of the 19th century, riders will be digging for gold along 3,197 ft of track for 2 and a half minutes!

The first drop itself is 103 ft but if you ride at night, you won’t even see it coming as the tunnel is not illuminated. No inversions of course but you get your fill of G forces, 4.2 to be exact.

Since Gold Striker’s debut, it has managed to make at least within the top 30 of Golden Ticket awards best wooden coaster list, ranking number 4 for best new ride in 2013.

So, saddle up for this one!

Final Thoughts on the Best Roller Coasters in California

You may have not heard of these rides or even these parks, which leaves me to stress the importance of exploring new terrains and seeing what these parks have to offer.

It also shows that there are more parks in California besides Disneyland Resort and Universal Studios Hollywood. While both destinations are fantastic in their own right, they are simply the beginning of California’s offerings.

What California roller coaster do you feel should be on our next list? Share with us in the comments section below!

UP NEXT: 5 BEST Things to Do in Avengers Campus at Disney California Adventure