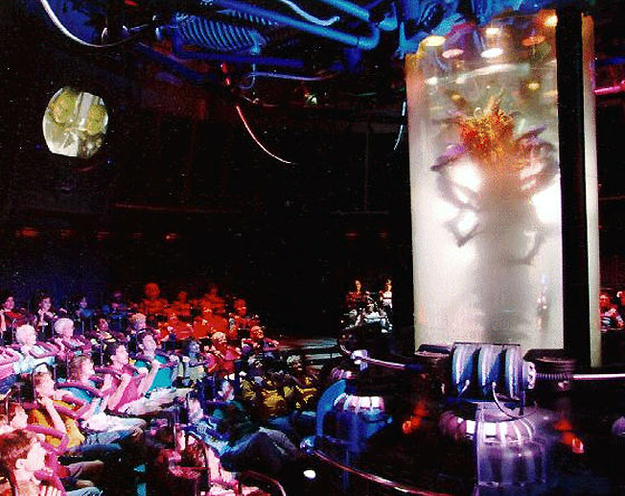 Do you miss ExtraTERRORestrial Alien Encounter?

A few weeks ago, on a super EXTRA hot Florida day, I spent some time in Tomorrowland at the Magic Kingdom exploring the nooks and crannies I’d ignored on prior visits.

On my journey I passed Stitch’s Great Escape with a less than five minute wait and thought to myself, “why not catch the next showing?”

So, I detoured and headed inside for the pre-show.

Nothing had changed. Details such as the DAMP smell of the room and the old Magic Kingdom attraction odor were all too familiar to me.

Then I stood there as the robotic tech went through his bit about the capture of a level three, which would be Stitch.

I then wondered, why ExtraTERRORestrial Alien Encounter had to die…and why Stitch’s Great Escape still lives?

Personally, I’ve never been a fan of the ExtraTERRORestrial change to Stitch’s Great Escape.

The story line of Stitch was left shallow with an attraction that did the same. It took to the original essence of ExtraTERRORestrial and diluted it to a second-class experience.

While on the attraction I reminisced about my first time on it when it was ExtraTERRORestrial and how viscerally, enthralling yet terrifyingly addictive it was.

What was interesting was that I still somewhat enjoyed the terror and heart-pounding experience of Stitch’s Great Escape.

Mainly because of what I knew it once was and also the fact that it still could make theme park goers, both young and old, petrified.

ExtraTERRORestrial produce special effects unlike any attraction of that time.

The technological goal was to provide an immersive, sensory overload experience with the following techniques:

As you can see the ExtraTERRORestrial Alien Encounter sounded fully immersive and completely stunning, but the actual experience was way better and is hard to explain in words.

Let’s take a look at the differences between Stitch’s Great Escape and ExtraTERRORestrial.

Now that you know a little bit about the technology and history of this Disney attraction, let’s go through some cool facts that I discovered during my research.

On September 21, 2016 it was announced that Stitch’s Great Escape would be going from daily operation to seasonal operation, depending on attendance.

This is probably a sign that the attraction is heading to extinction solidifying the death of the ExtraTERRORestrial Alien Encounter and it’s legacy.

Do you think Disney should have kept this attraction at the Magic Kingdom? Let us know in the comments section below.

If you enjoy this article, then you’ll love reading about these classic theme park attractions:

Ready to book your trip? Read the Disney Vacation Planning Guide for your next dream trip!