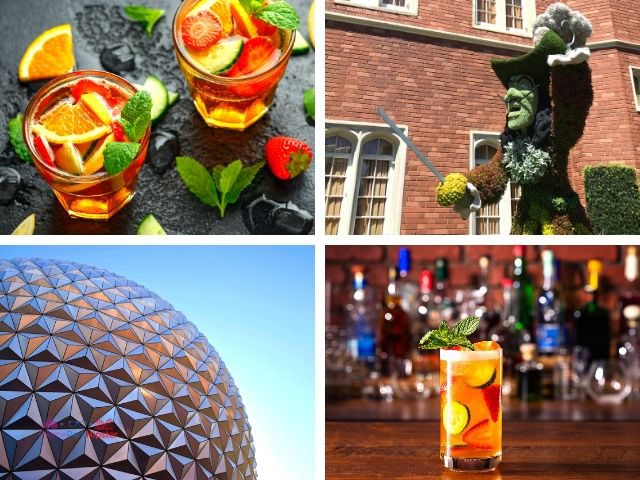 It’s time to toast to the weekend with this week’s HIPSTER Drink of the Week, Pimm’s Cup Cocktail at Epcot.

The Pimm’s Cup drink is located inside the Epcot Rose & Crown Pub and is an outstanding way to begin the weekend.

What is Pimm’s Cup Made From?

Pimm’s No. 1 is a gin-based liquer made in England from dry gin, liqueur, fruit juices and spices (complete recipe still unknown). It was created in the mid-late 1800s by the English oyster bar owner James Pimm.

The Pimm’s Cup was originally a tonic created to help with digestion due to its secret ingredients of different liqueurs and herbs. It was later re-branded into the beverage that it is known for today.

How Much Alcohol is in a Pimm’s Cup?

Pimm’s No. 1 has an alcohol concentration of 25% and tends to have a dark, golden-brown color, a medium body and a taste of citrus fruits and spices.

This simple, yet delicious cocktail mixes Pimm’s No. 1 and Sprite ®.

The Rose & Crown Pub definitely delivers something so simple that tastes extremely scrumptious. You can barely taste the alcohol, a plus for some drinkers, which leads to a nice buzz complete with a smooth, sweet finish.

To me the Pimm’s Cup cocktail tastes like a milder version of ginger beer with hints of citruses and spices.

You can serve it on the rocks or you can use it in mixed drinks. This is the perfect summer drink that can be served in a variety of ways and mixed with:

Rose and Crown at Epcot

Believe it or not, Rose and Crown offers so many options to enjoy outside of the Pimm’s Cup.

Here you can enjoy classic treats known in the U.K. such as tasty pints of traditional beers, and other British fare right in the heart of Epcot World Showcase.

Most Common Epcot Drinking Around the World Questions

Before we wrap up this Epcot guide, let’s go through some questions you may have for your next globe-trotting adventure!

How much does Epcot cost?

A one-day REGULAR season Epcot ticket starts at $109* (prices do fluctuate based on the season).

You can also get a specialty Epcot MagicBand sent to you for your vacation here!

Can you brink drinks into Disney World?

Yes you can. However, there are restrictions that you should know about.

Per Disney, you are allowed to bring food items—such as snacks or foods that do not require heating—into Disney theme parks.

You are not allowed to bring alcoholic beverages into any of the Disney parks.

Can you walk around Epcot with alcohol?

Yes, you can drink at Epcot while walking around World Showcase with your beverage.

How many countries are in Epcot?

There are currently 11 countries represented inside Epcot World Showcase.

What are the 11 countries at Epcot?

If you’re ever in Epcot, be sure to try out the Pimm’s Cup inside the U.K. Pavilion. This delightfully, tasty spirit can be purchased for around $12.00, the average cost for any cocktail at Walt Disney World.