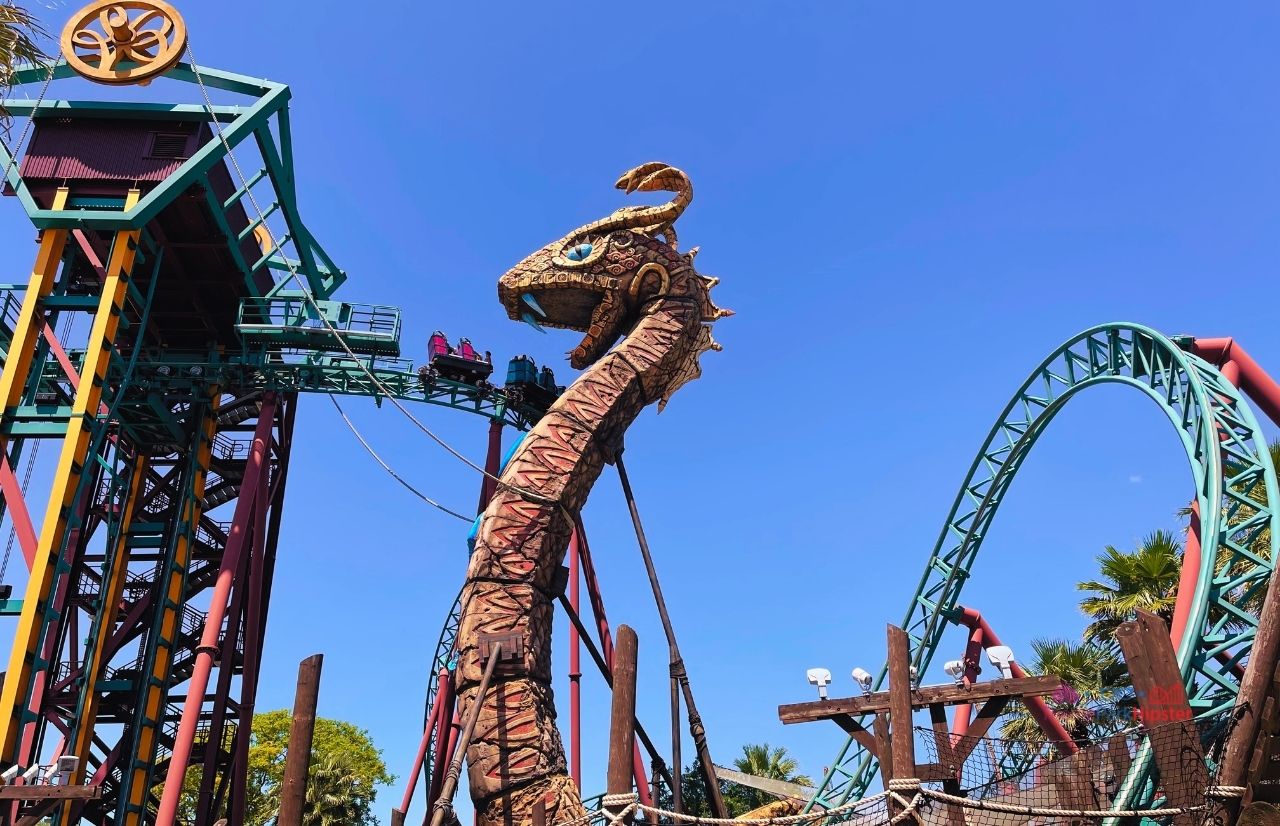 Your first thought when you look at Cobra’s Curse in Busch Gardens will be “WHOA!”

I know this because I was in your shoes a few weeks ago, alongside a few other awe-struck roller coaster enthusiasts!

As if the 80 feet tall, vicious-looking, giant cobra was not enough to scare the bejeezus out of you, they also decided to have a nice little backstory to make the experience seem unnervingly real.

You see, long, long ago there was a Serpent King who grew neglectful of his people. The people then smashed up the Serpent King’s palace, his statues and a bunch of other stuff.

As if extreme juvenile vandalism was not enough, they also cursed the king and the place.

Now, the archeologists could have just respected the Serpent Kings tomb, maybe put a few flowers on it and moved along. But they dig up the whole site.

Now the curse has been unleashed once again and you are caught in the middle.

As it is my duty to teach you how to evade this curse and come out of this ride alive (cue the evil laughter) I shall do so immediately.

Get up to 35% off of your Busch Gardens Tampa Tickets with Groupon TODAY!

Busch Gardens Tampa Bay has one of the biggest glow-up stories I have heard. Did you know that this very park was previously just an extension of a brewery?

It did not have any identity of its own and was simply advertising material for the Anheuser-Busch Brewery. Today it is the top roller coaster theme park Florida!

Busch Gardens has over 15 different rides and attractions and has been the front-runner in new roller coaster trends.

Cobra’s Curse, however, takes the prize for being one of the most well-planned roller coasters the park has. It not only has a bone-chilling backstory but is also designed to immerse the rider in the experience completely.

It was opened on June 17, 2016 amidst much excitement and speculation.

Cobra’s Curse at Busch Gardens was one of the few spin roller coasters in the world and also had a 70-feet vertical lift (not to mention an 80-foot scary monster idol, King Venymyss).

Its unique storyline has had tourists all around the globe coming in for have a chance to fight the curse.

The cherry on top?

Cobra’s Curse at Busch Gardens is one of those roller coasters which has a lot more going on for it than just being a roller coaster.

When you enter the queue for the ride, you enter an underground maze that not only takes you to the ride but also through the Serpent King’s tragic (well, sort of) story.

They take you through an excavation site where the archaeologists unsuspectingly dug up the Serpent King’s tomb and unleashed the Cobra’s Curse on all those who dare step on his land.

After a very visual and vivid experience in the queue, you will have finally reached a cavern where you can step into the train and strap yourself in to voluntarily experience the Cobra’s Curse (we humans do crazy things).

As the train moves forward, you finally see the sunlight, just long enough to regret getting on the ride in the first place.

You see, the 2,100 feet of twisting and turning track can make you want to scream before the train has even picked up speed.

How fast does Cobra’s Curse go?

Cobra’s Curse at Busch Gardens can reach speeds of up to 40 miles per hour!

The train slowly rises up 70 feet until you are face to face with the ginormous idol of the Serpent King.

The dramatic music playing in the background fades away to the sound of your screams as you hurtle past the idol.

How long does Cobra’s Curse last?

You’ll be happy to know that Cobra’s Curse lasts for 3 minutes and 30 seconds. A good time for a roller coaster.

You are taken on a wild journey along the serpentine tracks. Throughout your adventure, you will not ask anyone why Cobra’s Curse at Busch Gardens Tampa is called a spin roller coaster anymore.

The train slows down and spins you to a side. You think this is it, the curse has lifted. Oh, how wrong you would be!

I’m sorry, the dramatic music is still playing in my head (Dun-Dun-Dun).

Anyways, at this point you will be thinking that you should have not eaten that last French fry, because you’re immediately pushed backwards.

You can tell me how scary it is when you cannot see where you are going and the train keeps spinning around at odd moments.

As mentioned earlier, the entire ride takes about three and a half minutes but when you finally glide to a stop, you could have sworn it took forever.

Read: Incredible Groupon Busch Gardens Travel Deals You Must Get

Cobra’s Curse is one of the most unique roller coasters in the world. And yes, this is the moment where I am going to breakdown the whole spin roller coaster deal.

It is quite exhilarating to be propelled across 2,100 feet of twists and turns at a speed of 40 miles per hour. But that is a little tame for Busch Gardens isn’t it?

So, Busch Gardens decided to spin its passengers around while they were still on the ride about 70 feet up in the air.

The screams coming from the ride were confirmation that this was a great family addition to the roller coaster lineup.

For this particular ride, Busch Gardens employed the legendary Mack Rides Company. It has a total of 8 trains.

In each train, there are two cars which can accommodate four people.

Of course, the cars are spaced out so there is absolutely no danger of hitting another car while spinning around on the track.

The Cobra’s Curse also has a different take on how it expects passengers to ride it.

And by that, I mean that halfway through the ride they switch it up for the passengers getting bored (aka no one) and make you zoom up and down hills backwards… while still spinning.

At this point, I may have scared you away for good.

But just remember that 40 miles per hour for a roller coaster really isn’t much. You will survive!

Now that you know what to expect on Cobra’s Curse, let’s go through a few tips to make the most of your visit.

1. Arrive at the Park Early

A frequent complaint among riders is that the queue is too long. And it is. You may be thinking of a whole heap of other things you could be doing rather than just standing.

For this reason, I would advise you to be at the park nice and early so you can skip the long wait.

Join the Conversation on the Solo Theme Park Traveler’s Community on Facebook!

2. Take Precautions if You Get Motion Sickness

Do not get on this ride if you get dizzy easily or have issues with vertigo.

The spinning portions of the ride may bother your motion sickness and can affect the rest of your day at the park.

Thinking about making a trip to Tampa and want to explore all the attractions like Busch Gardens for one low cost, then get your city hopper pass here!

3. Sit Back and Enjoy the Ride

Lastly, don’t forget to put your phone away and just enjoy the ride. Don’t worry about taking that roller coaster selfie for the Gram.

You can do it later. Enjoy each and every second of those two and a half minutes.

Hipster Power Tip: This is one of the only few rides in Busch Gardens with an indoor waiting queue.

Going solo to Busch Gardens takes a lot of courage and I respect the fact that you are even trying.

It is nothing to be ashamed of or self-conscious about. Sometimes you are all the company you need and that is perfectly normal.

I really hope you enjoyed reading about the Cobra’s Curse as much I enjoyed writing it. Busch Gardens Tampa Bay is totally worth the hype and you should go check it out as soon as you can!

That is all for now! Have a blast when you go visit the Serpent King!