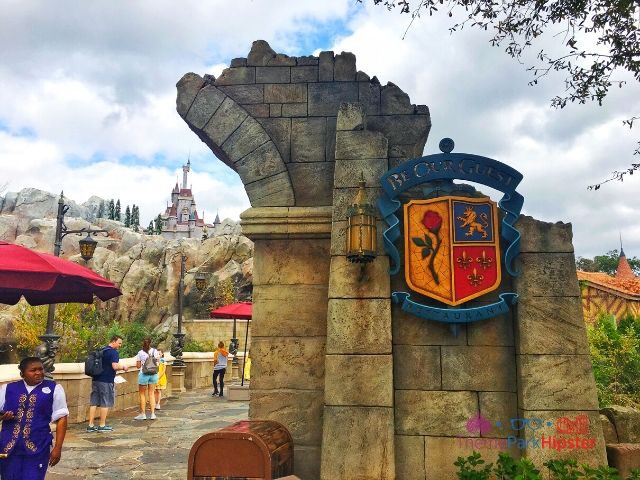 Many fans of the Belle and Beast story will make breakfast at Be Our Guest Restaurant a Disney trip must do!

Here at the Magic Kingdom, you can dive deep into the majestic castle that we’ve seen so many times on the Beauty and the Beast movies.

In the heart of New Fantasyland is where you’ll come to enjoy the food offerings of this popular Walt Disney World Restaurant.

But will you enjoy it?

At the end of this guide, I will give my honest review of my breakfast experience in the Beast’s castle.

What is the Be Our Guest Restaurant?

Be Our Guest Restaurant is a fast-casual restaurant that serves both American and French cuisine. It is located in Magic Kingdom Park, Fantasyland.

In 2009, Disney made to expand Fantasyland and as part of the expansion, it was announced that there would be a restaurant (Be Our Guest Restaurant) themed on the Beauty and the Beast film.

This announcement came at the D23 Expo and in the initial announcement, it was said that the Ballroom from the film was the dining room to be used.

Later on, it was made known that the Ballroom, the Rose Gallery, and the West Wing were all going to be a part of the restaurant.

The restaurant was opened on 19 November 2012 at a minor event and services were offered to the guests. However, the grand opening came on 6 December 2012, less than 3 weeks after.

At the start, they offered 2 types of services: over-the-counter lunch and table services for dinner.

It started with a test-run between March and June 2015 and it became a full-time service in August 2015.

What does it feel like to eat at Be Our Guest Restaurant?

As mentioned earlier, the restaurant is themed on the Beauty and the Beast film so you can expect to see and experience an environment similar to that in the film.

The experience differs for each meal of the day and for each dining room.

The West Wing, which is the smallest dining room, is made to recreate the desolate times of the Beauty and the Beast film when the Prince was still beastly.

On the other hand, the larger rooms have a livelier atmosphere. Now let’s go through the feeling in the dining rooms.

The West Wing dining room uses dark lightings to recreate the dreariness of the period when the curse had not been broken and in the background, ominous tunes are played.

Do you remember that wilting rose that was like the clock indicating how much time the Prince had left to fulfill the conditions for the spell to be broken? The Enchanted Rose?

Well, the Enchanted Rose is put on display in the West Wing dining room with its petals falling slowly and the events of the wilting of the rose are recreated using special effects.

At the point the last petal falls, you will hear a thunder sound from outside the room followed by a flash of light like lightning.

The lightning reveals a portrait of the prince before he became a beast and the portrait is flawed with claw marks like it was in the film.

The Rose Gallery dining room is less dreary than the West Wing dining room. The room is brightly-lit and music comes from a tall music box that will surely catch your attention.

This music box is about 7 feet tall and is made in the structure of Beauty and Beast dancing.

The walls of the Rose Gallery are designed with tapestries; these tapestries are images of scenes and of other characters in the film.

Next up is the largest dining room of the 3 dining rooms, the Ballroom. The Ballroom is perhaps the brightest of the 3 rooms and it recreates the early moments when the curse on the Prince was lifted.

This room is brightly lit also and you will also see snow outside the room similar to the way it was in the film. The music played in the Ballroom is not ominous and as said earlier, the music is in sync with music from the Rose Gallery.

Also, in the Ballroom, there is this huge & beautiful chandelier with over 80 candles and 100 crystals that hangs at the center of the room adding more light to the room.

While guests eat their dinner, the Beast walks around the dining rooms to interact with the guests – this is not the real Beast obviously.

The services offered during Breakfast at Be Our Guest Restaurant is of the counter service type and the experience is satisfactory.

One of the perks of having breakfast at Be Our Guest Restaurant is that you get to enter Magic Kingdom before the park opens for business.

This is particularly nice if you have always longed to take pictures when the park is less busy or empty.

Be Our Guest Menu for Breakfast

During breakfast at Be Our Guest Restaurant, 4 types of meals are made available. These meals are entrees, desserts, beverages, and kids’ meals.

There are 9 entrees on offer and these are:

All meals on the entrée menu go for the same price at $29.00 (price subject to change).

There are 21 items on the beverages item including drinks for adults only and on the dessert menu, there is only one item, The Master’s Cupcake.

The kids have 5 meals to select from on the Kids’ Meals menu.

These meals all go for the same price and they are Crepes de Cogsworth, Fifi’s French toast, Chip’s Cereal with Fresh Fruit, Scrambled Eggs de Maurice, and Philippe’s Toasty Oats.

7 Tips for a Good Visit to Be Our Guest Restaurant

On my visit I got the Scrambled Egg Whites that was served with Chicken Sausage, Roasted Tomatoes, and Fresh Fruit. Everything was straight to the point for me.

The chicken sausage had a sweet hint to it which complimented the roasted tomatoes. I did add a bit of salt and pepper to both the eggs and the tomatoes to give it some flavor.

My only compliant about the menu is that many of the items are pork-based, which is a meat that I do not consume. Because of this, I had a hard time finding a dish perfect for me.

Plus, the ordering system for counter service is not set up in the most user-friendly way for you to substitute your meat options.

My favorite aspect was the basket of bread that I received which came with croissants, mini cinnamon buns, muffins and more that I had all to myself on my solo day at the Magic Kingdom.

I did get the Master’s Cupcake which came with Chocolate Sponge Cake topped with Lumiere’s special “Grey Stuff” and man-o-man was it absolutely DELICIOUS and the highlight of my dining experience!

Not only was the “grey stuff” mixed to perfection, the cake was moist and not too overbearing in the chocolate flavor.

I was so surprised at how much I enjoyed this dish as I thought it would be an overrated food item at this Disney park.

My meal was then topped off by a Peach Bellini which I had to do because it was my first time enjoying an adult beverage inside the Magic Kingdom. And what better place to do in than deep inside the Beast’s castle.

As far as the service, it was okay. Nothing to brag about. I made my reservation online and still had to wait in line to order my food like the standard counter service protocol at Disney.

Once I ordered my food, I found a place in the West Wing and the only thing my server did was check my ticket and that was basically it.

Someone from the kitchen brought me my food and I was left to grab my own silverware and beverage at the nearby counter for breakfast. So, I didn’t see my server much during my trip.

Be Our Guest restaurant has a whole lot in store for the guests and the prospects of visiting are always exciting. Going with no prejudice will help you realize and enjoy this place to the fullest especially at dinner time.

So, for your trip to Fantasyland, add Be Our Guest restaurant on the list of places to be.

I give this restaurant a 7.7 out of 10 on the ThemeParkHipster dining scale.