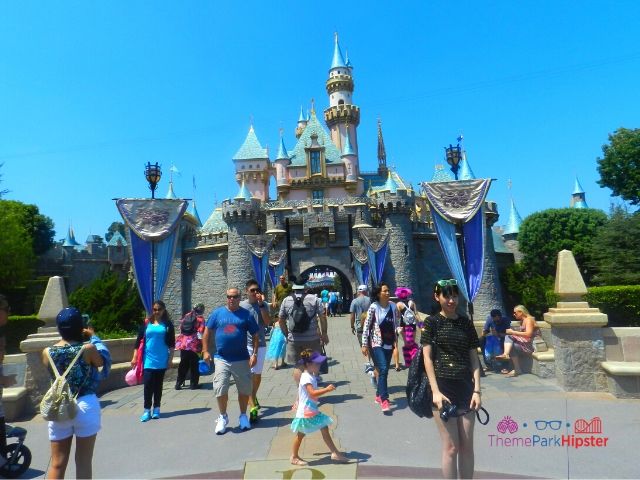 The Mint Julep is the Kardashian of Disneyland drinks. By that, I mean to say it is that super-famous thing you either love or hate.

There is just no in-between.

It has huge crowds of dedicated fans queueing up for it. And has around the same number of people sneering at it and calling it ‘not real’.

Quite an eventful life for a non-alcoholic drink, wouldn’t you say?

But all the drama aside, it is a very refreshing drink that is perfect for hot summer days. And YOU should know how to make it!

Why We Love the Mint Julep

Personally, knowing the Disneyland Mint Julep recipe has been a life-saver. I just adore any drink with lemon and mint in it (just ask the bartender how many glasses of mojitos I average).

They make you feel so light and cool. But the Mint Julep is different from the other icy, minty and lemony drinks out there.

That’s because it has more mint than lemon.

And yes, many people have described it as ‘medicinal-tasting’ or ‘dude, that’s cough syrup’. But I don’t agree and I don’t think you would either.

To save you from driving all the way to Disneyland to try this controversial drink, I am here to give you the Disneyland Mint Julep recipe!

Let’s get shaking (excuse the bartender pun), shall we?

Backstory of the Mint Julep

Ever watched an episode of Keeping Up With The Kardashians without going on Screen Rant first? I don’t think so.

(And if you did, what is wrong with you? You like the suspense?!)

You see, Disneyland did not always serve Mint Julep. Although considering how popular it is, people will believe it has always been served.

The traditional Mint Julep is a staple in the southern states of the United States since the eighteenth century. That’s right, it goes way back!

Disneyland decided it was missing a touch of the southern states and added Mint Julep to its menu in 1996. In doing so, it made loads of changes– starting with removing alcohol from the recipe.

The traditional Mint Julep recipe involved bourbon, mint, water and sugar. The Disneyland version went heavy on the mint and added a shockingly artificial shade of green to it (I thank God every day that they have changed that now).

And of course, this became famous and infamous overnight. Sweaty people loved it. Zealous bartenders hated it. And teenagers queued up for it.

Now that you know where it came from, it’s time to jump into the recipe!

For making enough Mint Julep for 10 people, you will need:

To top it off, you will need:

Now, let’s jump into the proper procedure of making this refreshing drink:

To make a single cup of Disneyland’s Mint Julep, mix ¼ cup of the mixture you just made with ¾ cup of water.

Throw in some ice, add the toppings and drink away!

Side Note: People have said that the mint flavor was a little too intense. So, you can subtract as much Crème de Menthe as you need to. Play around with the recipe till you have got the perfect Mint Julep for yourself

Where to find Mint Julep in Disneyland

When you think of the southern states, what comes to mind? Charleston, Fort Sumter, Texas, New Orleans…

What about New Orleans Square in Disneyland?

That’s right! Disneyland didn’t want to place the traditional drink too far from its southern roots.

They created a Mint Julep bar right across from the New Orleans Square railroad station. All you have to do (apart from booking a ticket to Disneyland, etc.) is walk in the direction of the Haunted House for a while.

When you come to the end of the French Market Restaurant’s patio, take a left. And there it will be on your left– the Mint Julep Bar.

Before you ask, yes the bar also serves snacks and the ever-essential coffee. I have heard a great deal about the beignets. Some people swear that it is not worth getting a mint julep if you are not getting a beignet with it.

Plus, they are shaped like Mickey Mouse so…. Need I say more?

Quick Hack: You may not know this, but the Mint Julep Bar shares the patio with the French Markets Restaurant. You can kick back there with your Mint Juleps, beignets and a great view of the Rivers of America. Oh and there’s live jazz music too!

Mint Julep Flavors Offered in the Past at Disneyland

Ye olde history books speak of only two Mint Julep recipes that were used in Disneyland. For convenience purposes, we can call them Mint Julep and Mint Julep II.

Mint Julep the First was somewhere between electric green and murky lake water. It was refreshing and had a couple of cherries in it. But many people complained that it practically tasted like medicine (cough syrup to be exact).

Fun Fact: Mint Julep actually originated as a medicine. But we don’t want to drink medicine with ice in Disneyland (or anywhere, really), do we?

Disney decided to hear out its subjects and reduce the amount of mint in the Mint Julep. And that’s how Mint Julep II was born.

Mint Julep II has a lot less mint, no cherries and has lost the eerie green color. It is more like lemonade with a hint of mint.

How is it different from mojito? That’s for the future generations of Disney-goers to fight over.

Let’s go through a few of the most commonly asked questions around the historic Mint Julep.

What is a Mint Julep at Disneyland?

Mint Julep is a non-alcoholic drink available in Disneyland at the New Orleans Square. It is a refreshing blend of mint, lemon, lime and soda. It was adapted from the famous alcoholic version of Mint Julep which is drunk during the Kentucky derby.

Well, minty. But it also has a touch of lemon, lime and sugar. The first version of the Disneyland Mint Julep had a lot more mint, but they have toned it down since. The alcoholic version also has a splash of brandy.

What is in a Mint Julep at Disneyland?

For the entire recipe, you have to scroll through this article. But the gist of it is lemon, lime, creme de menthe, sugar, soda, water and ice.

Of course, the garnishings like mint leaves and lemon wedges are also included. You could add a little umbrella if you like.

Why do they drink Mint Juleps at Kentucky derby?

The Mint Julep was declared the official Derby Drink in 1938. And the reason for this is that the founder of the Kentucky derby planted a mint plant near the tracks when he came across them.

Now. I have no idea how true this is but mint, brandy and horse races have gone together ever since.

Why is it called a Mint Julep?

Now that’s an interesting question! The ‘mint’ in Mint Julep clearly comes from the plant. But the ‘julep’ part has a fascinating backstory. It was formed during the melding of two very different languages– Spanish and Arabic.

It loosely translates to rosewater and is believed to refer to the sweetness of the drink. So there you have it! Mint Julep means minty sweetness– very aptly describes the drink.

Where can I find Mint Juleps in Disneyland?

So, what are you waiting for?

Go grab your supplies and make the drink before winter sets in. You know, hold on to the tiny whiff of summer in the air.

But you might have to postpone this activity to next summer because getting hold of that Creme de Menthe is notoriously difficult. I have heard that Amazon sells them though.

I mean, you could make it in the winter too. It’s a free country.

But remember, next time you go to Disneyland and feel beads of sweat popping up on your forehead, it’s time to pay the old New Orleans Square a visit.

UP NEXT: What’s the Magic Behind the Famous Beignets at Disneyland?