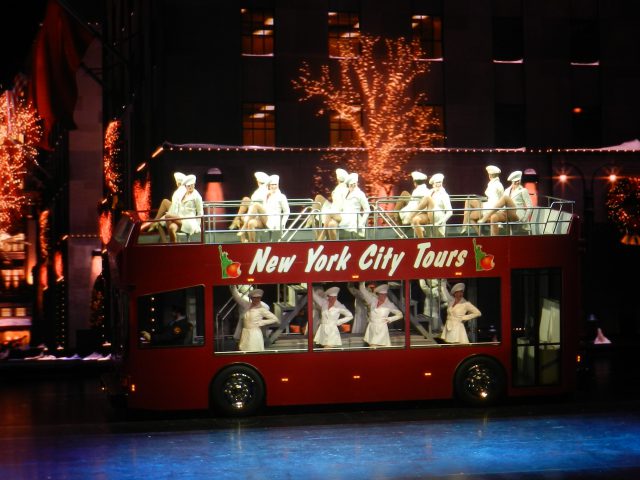 A small piece of New York City has landed in the center of the central Florida theme park world. The Radio City Christmas Spectacular Starring The Rockettes premiered in Tampa this past Thursday to guests at the Straz Center.

We were even treated to a grand red carpet event to welcome the lovely ladies, and Santa, as they were escorted down the aisle with Tampa Bay’s finest men in blue.

What is the Radio City Christmas Spectacular?

For any Hipster not familiar, the Rockettes Christmas Spectacular debuted on December 21, 1933 at Radio City Music Hall in Manhattan.

The reputation of the Rockettes pictorial dance precision and creative productions has placed this brand in the ranks with top Americana pop culture.

The highly anticipated show brought out the festive spirit of Tampanians and was started with a narration of ‘Twas the Night Before Christmas by TPD’s Chief of Police, Jane Castor.

Once the audience was all warm and fuzzy with holiday cheer, the snowy winter wonderland celebration began. The first big reveal came from a reindeer of Rockettes galloping in the familiar detailed routine to Sleigh Ride.

The sleigh ride then turned into a tap dancing spectacle complete with a holiday remix to the Twelve Days of Christmas. This dance number incorporated a river dance echoing the sound of their rhythmic shoes.

If countless legs and high reaching kicks weren’t enough to get the blood flowing, then the interpretation of the classic Nutcracker story was just right to have the audience swaying and humming to their childhood dreams come to life.

It was complete with a winking belly-buttoned pierced princess teddy bear.

The dancers gave an elegant performance in over-sized teddy bear attire to make sure this act was told accurately.

After the Nutcracker wistful ballet, it was time to see the famous Parade of the Wooden Soldiers. This performance had everyone in the Straz Center mute with wonderment as the clear-cut marching began to blur the lines between reality and imagination.

After the big Toy Soldier fall occurred, guests were taken on a ride back to the City to do Christmas like a true New Yorker!

Complete with a cherry red double decker bus and stops from central Park to the bright lights of Times Square.

Up next was a James Bondish journey to figure out how Santa Claus pulls off his omniscience.

The answer came in the form only the Rockettes could do in an astonishing visual overload cabaret-like scene of infinite St. Nicks everywhere.

We were definitely not in Tampa anymore!

After such a wonderfully presented energetic scene, the night closed out with Christmas recollections. This holiday interpretation took everyone back to the root of what this special holiday truly means.

The magic, the memories, and the mysteries truly allowed Hipsters to become aware of the importance of generosity throughout the year.

The reflective portion of the show eventually led to The Living Nativity, which was my favorite scene of the entire evening. It went well visually through marvelous costumes flowing with royalty and delightful dialogue that truly told the blessed story.

Joy to the World!

The night ended with a jubilant rendition of Joy to the World. This song signified to me (for some odd reason) that the Christmas season was officially here!

Maybe I was just caught up in the Rockettes breathtaking holiday presentation.

Perhaps it was the fellow theater patrons around me all singing gleefully to the classic tunes, or maybe it was the second glass of Cabernet Sauvignon, but the joy had me all lit up like a Christmas tree.

Whatever the case was, I was on cloud nine. For me to describe this Radio City Christmas Spectacular in only one simple blog post does not do it any justice.

As you can tell, this show was not much different from the ones in the past. If you’re a first timer or a returning fan, you’ll definitely enjoy this incredible production.

I recommend this annual musical holiday stage show to anyone who loves all things Christmas.

How Long is the Rockette Show?

The Rockettes Christmas Spectacular last about 90 minutes which goes by quickly. It’s filled with nonstop holiday entertainment from the opening to the closing scene.

Always check for the Radio City Christmas Spectacular tickets on Groupon. You never know if you’ll find a great deal for the show.

Until next time, Have a Happy Holiday Hipsters!