News around Universal Studios has been buzzing throughout all media sources this past week mainly due to the exciting new things happening every day around the park! Join us every week to read about what’s new “Around the Universe.” This week’s update features: Diagon Alley grand opening, new CityWalk eateries, and much more!

Fire-Breathing Dragon Wows Crowds: A 60-foot, fire-breathing Ukrainian Ironbelly dragon sits atop Gringotts Wizarding Bank and periodically thrills the crowds below with a burst of fire. Each time, the people in Diagon Alley jump from fright and then cheer in amazement. It’s something you just have to see! Here’s a slow motion video of the dragon breathing fire.

Follow #DiagonAlley News on Social Media: Whether you use Facebook, Twitter, Instagram, Vine or something else, keep an eye out for popular hashtags used by the many Muggles now exploring Diagon Alley. Some to watch are #MuggleMoments (this is an official hashtag announced by Universal Orlando), #DiagonAlley, #Potterwatch and #Gringotts. Also watch the official @UniversalOrlando accounts too.

Get a quote on a Universal Orlando Vacation Package

New! Velvet Sessions with Lou Gramm July 31, 2014: Velvet Bar hosts the city’s only rock ‘n’ roll cocktail party on the last Thursday of the month. Admission is $29 on-line or $35 at the door and includes FREE specialty drinks & finger foods and warm-up tunes from 6:30-8:30pm, plus FREE valet parking. Cash bars and live band from 8:00pm onward. Each “session” combines creative cocktails with live music from some of the hottest rock bands.

Reminder! Wantilan Luau – Saturday Nights Year-Round: Sit back and experience an evening of authentic Polynesian food and entertainment at the enchanting Wantilan Luau, a weekly Hawaiian dinner show featuring an all-you-can-eat buffet of Polynesian specialties, live Hawaiian music and traditional hula dancing. Hula and fire dancers delight the audience and entice a few to even learn the hula! Adults: $70 for Priority Seating or $63 for Regular Seating. Children (ages 3 – 9): $40 for Priority Seating or $35 for Regular Seating. Ages under 3 are complimentary. Price includes gratuity, non-alcoholic beverages, wine, beer, and Mai Tais!

New! Bread Box Handcrafted Sandwiches Now Open: With a Bread Box sandwich, you’ll be transported back to your childhood kitchen or your favorite street corner deli. Here you’ll find that the combination of quality meats and vegetables, fresh bread, and simple preparation can transform a sandwich into something more. 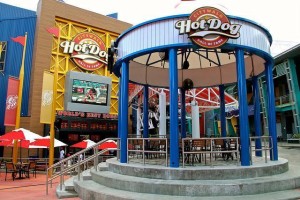 If you’re looking for truly the best vaction option, then check out Laura@DestinationsinFlorida.com or call at 314-374-6654. Mention ThemeParkHipster.com for an awesome discount!

2 thoughts on “News Around Universal Studios: Reasons Why You Must Go”